Biological invasions involve the movement of species outside their native area, to different environments in which these species have evolved, and to which had already been adapted. These abrupt changes of environment can represent a good opportunity to study evolutionary processes. This video shows the results of a study conducted by researchers at the University of Vigo (Spain) and Coimbra (Portugal) to study the evolution of the breeding system of the invasive species Oxalis pes-caprae outside its native distribution range: http://vimeo.com/84459839

A short video describing how the radiation of Darwin’s ground finches is linked to different food types: http://vimeo.com/95292018

I wanted to walk his famous sandwalk. I naively imagined that while doing so I would have some amazing new insight or perhaps just come to a new appreciation of my chosen vocation. I imagined walking along just as Darwin did, thinking the same things he thought. But when I got there and started to walk, I began to feel angst as to just how I should be walking it. I wanted to walk it the same way as Darwin but how did he walk it? http://vimeo.com/92140010

A sweetly sung narrative about a girl who’s nostalgic for the dinosaurs. By the end of the song, she comes to terms with her feelings. http://vimeo.com/92808065

A song about our atoms coming from the stars featuring imaginative, colorful, Calder-meets-Miró illustration. https://vimeo.com/92116402 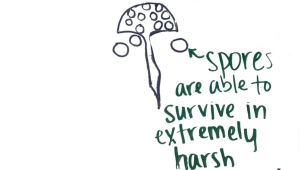 An explanation of the basis of altruism, as shown through the example of the slime mold: http://vimeo.com/93028086

The Trisomy 13 group from a Notre Dame Evolution class make a video to explain evolutionary concepts, including natural selection and species formation. Concepts are explained by students on the Notre Dame campus who must dance while explaining the evolutionary concepts. An accurate definition of each concept is then explained using white-board animations: http://vimeo.com/93076272

We tackled the complexity of segregation distortion by explaining it in a simplified manner: a children’s book. Advancing childhood science education is paramount for a more scientifically literate world: http://vimeo.com/93116320

Animation depicting some biological features of evolution, set to The Little Mermaid’s “Under the Sea.” http://vimeo.com/93132372

A brief history of Lamarck and his theories of evolution: http://vimeo.com/93116330.

Did you know that some organisms have many more females than males? This video tells the basics on why they do, and for that matter, why we don’t! http://vimeo.com/95597125

An overview of natural history and evolution of extrafloral nectaries. Demonstration of ant-plant interaction and ant behavior in three plant species belonging to three families: http://vimeo.com/94113744

A Natural Evolutionary Experiment: The Isthmus of Panama rose from the sea, connecting two continents and separating the Pacific from the Caribbean. The resulting interchange of plants and animals and the evolution of sister species are only two of the research subjects that draw 1400 visiting scientists to the Smithsonian Tropical Research Institute each year: http://vimeo.com/87102269

We visualize simulations of evolving populations with two traits by displaying individual organisms in two-dimensional fitness landscapes. We explore three phenomena in evolutionary dynamics that can be difficult to comprehend. First we show dynamic landscapes with two fluctuating peaks in which the population track the peaks as they appear at difference locations in phenotype space. We then demonstrate negative density-dependent selection, which causes the population to split into distinct subpopulations located on separate peaks, illustrating how speciation can occur in sympatry. Lastly, we show the survival of the flattest where the population prefers a tall narrow peak at low mutation rate, but moves to the lower but wider plateau at high mutation rate. http://vimeo.com/96251726

Populations coevolving in fitness landscapes that are affected by another population.
1) A moth-orchid evolutionary arms race
2) A rock-paper-scissors system of three populations
3) Open-ended evolution of a host-parasite system

What are exaptations, what are adaptations, and how can we recognize them? This video explains the concepts behind exaptations and adaptations, one of the topics I am interested in during my PhD research at the Institute of Systematic Botany at the University of Zurich. http://vimeo.com/96431502

This student animation examines the genetics of mouse burrowing. A look at what it takes to become a master mouse architect. Based on research conducted by the Hoekstra Lab: http://vimeo.com/97219163

Bindozilla (Virus) is threatening a park in central London again. Lots of innocent people become dysfunctional or died. After hard training, Immuman (Antibody) has come out and try to save the world. Meanwhile, Bindozilla becomes stronger, clever and more dangerous through mutation. Can Immuman saves the world? https://vimeo.com/96857654

This is an introductory outline of a project I’m working on for my dissertation at UCLA intended for a general audience. The project will make recommendations on future siting of large-scale development in the Mojave using landscape-genetic informed population viability analyses: http://vimeo.com/96981762

he theory proposed by Richard Dawkins is a peculiar way to envision evolution. Not only the genes seem to use organism as “vessel” but some tend to be passed on to the detriment of individuals. Species change, evolve and eventually die out, while genes are forever: http://vimeo.com/96983321

Spoofing a recent billboard hit, members of the Biodiversity Centre at the University of British Columbia, Vancouver, Canada, entertain and inform you of research on hybrid zones and clines in birds. Get up and dance! http://vimeo.com/96966075

This video describes the effects of evolutionary drift on an island population: http://vimeo.com/97026593

A 3-minute video abstract for our recent paper on “Loss and Recovery of Genetic Diversity in Adapting Populations of HIV.”http://vimeo.com/97082655